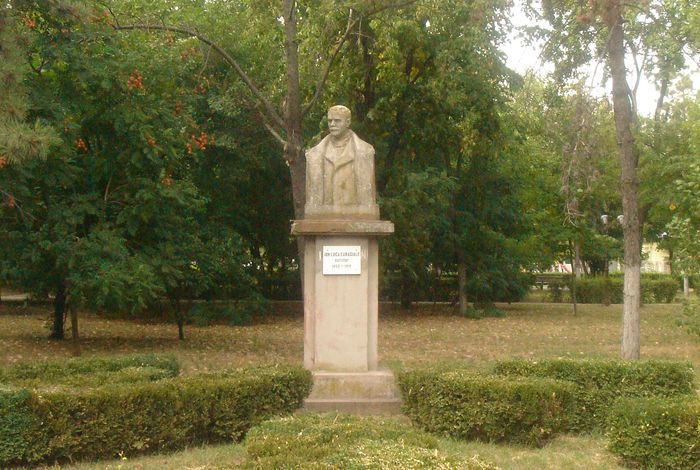 The trap was ingeniously contrived: a long rope fastened round a block of wood; lengthwise, at the place where the sawn panel had disappeared, was a spring-ring which Leiba held open with his left hand, while at the same time his right hand held the other end taut. At the psychological moment he sprang the ring, and rapidly seizing the free end of the rope with both hands he pulled the whole arm inside by a supreme effort.

In a second the operation was complete. It was accompanied by two cries, one of despair, the other of triumph: the hand is “pinned to the spot.” Footsteps were heard retreating rapidly: Gheorghe’s companions were abandoning to Leiba the prey so cleverly caught.

The Jew hurried into the inn, took the lamp and with a decided movement turned up the wick as high as it would go: the light concealed by the metal receiver rose gay and victorious, restoring definite outlines to the nebulous forms around.

Zibal went into the passage with the lamp. The burglar groaned ter-ribly; it was obvious from the stiffening of his arm that he had given up the useless struggle. The hand was swollen, the fingers were curved as though they would seize something. The Jew placed the lamp near it—a shudder, the fever is returning. He moved the light quite close, until, trembling, he touched the burglar’s hand with the burning chimney; a violent convulsion of the fingers was followed by a dull groan. Leiba was startled at the sight of this phenomenon.

Leiba trembled—his eyes betrayed a strange exaltation. He burst into a shout of laughter which shook the empty corridor and resounded in the inn.

Sura woke up suddenly—in her sleep she seemed to hear a terrible moaning. Leiba was not in the room. All that had happened previously returned to her mind. Something terrible had taken place. She jumped out of bed and lighted the candle. Leiba’s bed had not been disturbed. He had not been to bed at all.

Where was he? The woman glanced out of the window; on the hill in front shone a little group of small bright lights, they flared and jumped, now they died away, now, once more, soared upwards. They told of the Resurrection. Sura undid the window; then she could hear groans from down by the door. Terrified, she hurried down the stairs. The corridor was lighted up. As she emerged through the doorway, the woman was astonished by a horrible sight.

Upon a wooden chair, his elbows on his knees, his beard in his hand sat Leiba. Like a scientist, who, by mixing various elements, hopes to surprise one of nature’s subtle secrets which has long escaped and worried him, Leiba kept his eyes fixed upon some hanging object, black and shapeless, under which, upon another chair of convenient height, there burnt a big torch. He watched, without turning a hair, the process of decomposition of the hand which most certainly would not have spared him. He did not hear the groans of the unhappy being outside: he was more interested, at present, in watching than in listening.

He followed with eagerness each contortion, every strange convulsion of the fingers till one by one they became powerless. They were like the legs of a beetle which contract and stretch, waving in agitated movement, vigorously, then slower and slower until they lie paralyzed by the play of some cruel child.

It was over. The roasted hand swelled slowly and remained motionless. Sura gave a cry.

He made a sign to her not to disturb him. A greasy smell of burnt flesh pervaded the passage: a crackling and small explosions were heard.

“Leiba! What is it?” repeated the woman.

It was broad day. Sura stretched forward and withdrew the bar. The door opened outwards, dragging with it Gheorghe’s body, suspended by the right arm. A crowd of villagers, all carrying lighted torches, invaded the premises.
“What is it? What is it?”

They soon understood what had happened. Leiba, who up to now had remained motionless, rose gravely to his feet. He made room for himself to pass, quietly pushing the crowd to one side.

“How did it happen, Jew?” asked someone.

And” the man moved slowly up the hill, towards the sunrise, like the prudent traveller who knows that the long journey is not achieved with hasty steps.