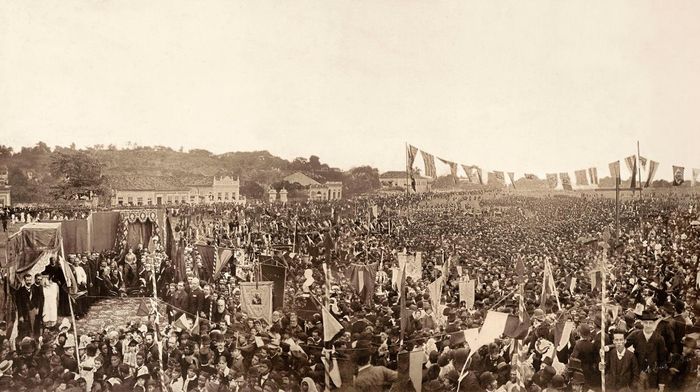 We went out. Once in the street the passing from semi-obscurity to day-light dazed me and I staggered. I began to fear that it would no longer be possible for me to conceal the crime. I kept my eyes steadily fixed upon the ground and took my place in the procession. When all was over, I breathed once more. I was at peace with man. But I was not at peace with my conscience, and the first nights, naturally, I spent in restlessness and affliction. Need I tell you that I hastened to return to Rio de Janeiro, and that I dwelt there in terror and suspense, although far removed from the scene of the crime? I never smiled; I scarcely spoke; I ate very little; I suffered hallucinations and nightmares.

“Let the dead rest in peace,” they would say to me. “Such gloom is beyond all reason.”

And I was happy to find how people interpreted my symptoms; I praised the dead man highly, calling him a good soul, surly, in truth, but with a heart of gold. And as I spoke in such wise, I convinced myself, at least for a few moments at a time. Another interesting phenomenon was taking place within me—-I tell it to you because you will perhaps make some useful deduction from it—and that was, although I had very little religion in me, I had a mass sung for the eternal rest of the colonel at the Church of the Blessed Sacrament. I sent out no invitations to it, I did not whisper a word of it to anybody; I went there alone. I knelt during the whole service and made many signs of the cross. I paid the priest double and distributed alms at the door, all in the name of the deceased.

I wished to deceive nobody. The proof of this lies in the fact that I did all this without letting anybody know. To complete this incident, I may add that I never mentioned the colonel without repeating, “May his soul rest in peace!” And I told several funny anecdotes about him, some amusing caprices of his.

About a week after my arrival at Rio I received a letter from the vicar. He announced that the will of the colonel had been opened and that I was there designated as his sole heir. Imagine my stupefaction! I was sure that I had read wrongly; I showed it to my brother, to friends; they all read the same thing. It was there in black and white: I was really the sole heir of the colonel. Then suddenly it occurred to me that this was a trap to catch me; but then I considered that there were other ways of arresting me, if the crime had been discovered. Moreover, I knew the vicar`s honesty, and I was sure that he would not be a party to such a plan. I reread the letter five times, ten times, a hundred times; it was true. I was the colonel`s sole heir!

Read More about The Pier part 2