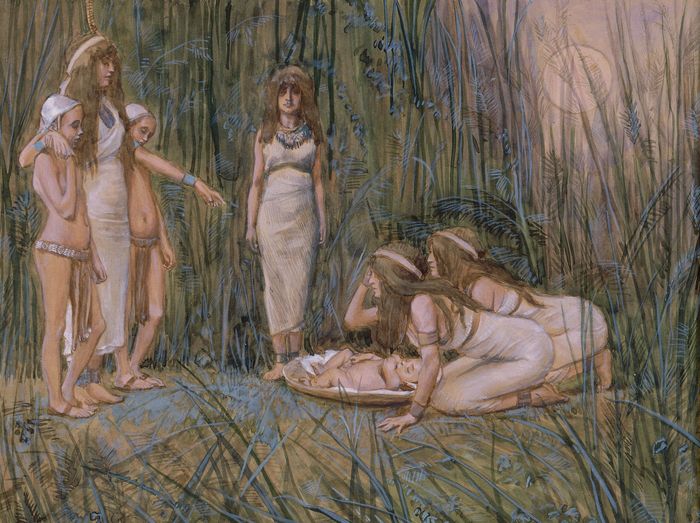 “Is he yours, Kulock? Well, I never!… Look at his little eyes … if he don’t look just like Marina! … her nose—exactly! as I live! What a jewel of a lad!… Give him to me!…” She took the baby from him, and bounced it up and down. “There!… there! you little rascal.”

Old man Kradnick, the “master” of the thieving gentry, got up slowly, approached the baby, examined it, and slapped Kulock on the back.

“May she burn like a fire! … She ran away, taking the candlesticks with her.”

The old man scratched his head. The younger Kradnick approached and said to Kulock: “That’s right. … I guess you’ll have to give up the profession now, and become a nurse. … A fine trick she played you, eh?”
“Don’t you be breaking your head about me. … The Lord is a provider, and Kulock is Kulock!”

He took up the infant in his arms and started across the town. It seemed to him that people were pointing their fingers, and laughing, at him.
When he reached the wood on the outskirts of the town, he seated himself on a stone.

Round about not a soul was to be seen. The branches of the trees murmured sadly, as they shed their yellowed leaves… the sound of a distant stream was faintly audible, as it gurgled and splashed among the stones.

Burih put down the child near him, and regarded it with a feeling of bitterness. The baby stared at him silently, sucking its hand and looking as if absorbed in meditation. Kulock hadn’t the least idea what to do with the child. For a fleeting moment he thought of abandoning it, but immediately a feeling of pity for the helpless mite, for his own flesh and blood, drove the thought from his mind. He took the child in his arms again, and pressed its little body close to him, examining, meanwhile, all its features. He thought he recognized his own, in them, and felt a glad warmth in all his limbs at the idea.

“Little Kulock!” he cried to the baby; “yes, you’re a little Kulock, all right; and you’ll be a fine chap too, I’ll bet. You’ll climb through transoms, and ventilators, and garret-windows… break off locks, and steal calf-skin leather. … And then you’ll have children… and their mother will desert them. … But—will you wander with your children from house to house begging for bread?… Who are you?… A Kulock, like me… you… I.”
He laid the child down near the river-bank, and stood behind a tree to see what it would do. … It pushed about with its legs, sucked its hands, and whimpered, as if in play. “Mam-m-a… mam-m-a.”

He stole behind another tree, farther away, but he could still hear its cries. He glided thus from tree to farther and farther away, till he heard and saw nothing more. … Then he took to his heels. But even as he ran, the infant’s cries kept ringing in his ears. “It might be rolling down into the river,” he thought suddenly. … His head ached, and he felt a gnawing at his heart. … But he kept on running. …