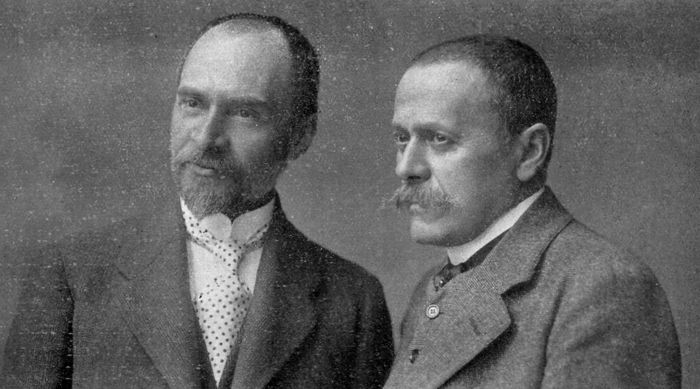 His throat was parched. He was thirsty. He washed a small glass in a three-legged tub by the side of the bar and tried to pour some good brandy out of a decanter; but the mouth of the decanter began to clink loudly on the edge of the glass. This noise was still more irritating. A second attempt, in spite of his effort to conquer his weakness, met with no greater success.

Then, giving up the idea of the glass, he let it fall gently into the water, and drank several times out of the decanter. After that he pushed the decanter back into its place; as it touched the shelf it made an alarming clatter. For a moment he waited, appalled by such a catastrophe. Then he took the lamp, and placed it in the niche of the window which lighted the passage: the door, the pavement, and the wall which ran at right angles to the passage, were illuminated by almost imperceptible streaks of light.

He seated himself near the doorway and listened intently.

From the hill came the sound of bells ringing in the Resurrection morning. It meant that midnight was past, day was approaching. Ah! If only the rest of this long night might pass as had the first half!

The sound of sand trodden underfoot! But he was sitting in the comer, and had not stirred; a second noise, followed by many such. There could be no doubt someone was outside, here, quite near. Leiba rose, pressing his hand to his heart, and trying to swallow a suspicious lump in his throat.

There were several people outside—and Gheorghe! Yes, he was there; yes, the bells on the hill had rung the Resurrection.

“I tell you he is asleep. I saw when the lights went out.”

“Good, we will take the whole nest.”

“I will undo the door, I understand how it works. We must cut an opening—the beam runs along here.”

He seemed to feel the touch of the men outside as they measured the distance on the wood. A big gimlet could be heard boring its way through the dry bark of the old oak. Leiba felt the need of support; he steadied himself against the door with his left hand while he covered his eyes with the right.

Then, through some inexplicable play of the senses, he heard, from within, quite loud and clear:

It was surely Sura’s voice. A warm ray of hope! A moment of joy! It was just another dream! But Leiba drew his left hand quickly back; the point of the tool, piercing the wood at that spot, had pricked the palm of his hand.

Was there any chance of escape? Absurd! In his burning brain the image of the gimlet took inconceivable dimensions. The instrument, turning continually, grew indefinitely, and the opening became larger and larger, large enough at last to enable the monster to step through the round aperture without having to bend. All that surged through such a brain transcends the thoughts of man; life rose to such a pitch of exaltation that everything seen, heard, felt, appeared to be enormous, the sense of proportion became chaotic.

The work outside was continued with method and perseverance. Four times in succession Leiba had seen the sharp steel tooth pierce through to his side and draw back again.

“Now, give me the saw,” said Gheorghe.

The narrow end of a saw appeared through the first hole, and started to work with quick, regular movements. The plan was easy to understand ; four holes in four corners of one panel; the saw made cuts between them; the gimlet was driven well home in the center of the panel, when the piece became totally separated from the main body of the wood it was pulled out; through the opening thus made a strong hand inserted itself, seized the bar, pushed it to one side and—Gentiles are in Leiba’s house.