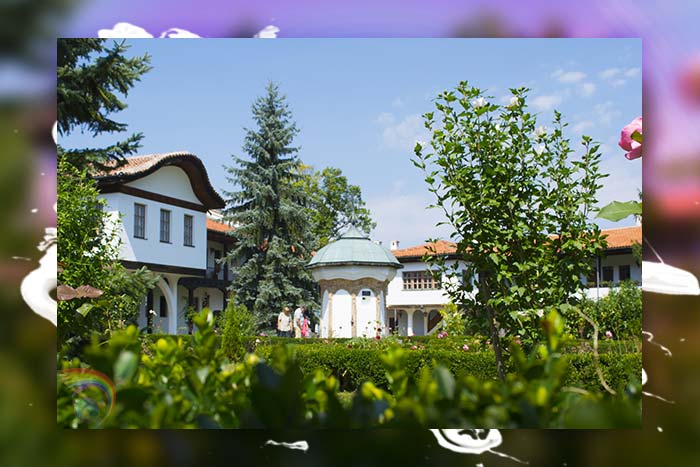 Monasteries in Bulgaria, tours Bulgaria, are unique because of their rich architecture, their icons and wall paintings. It’s not about religion or belief. Nor about being part of a mystery. It’s about a special atmosphere. Atmosphere of intimacy, cosiness… Bulgarian monasteries are also unique because of the legends around them. There is always mystery around each holy place.

This 22-day monasteries tour we made for a family for the summer of 2017. Many monasteries, many places they visited. All good memories and experiences.

Here we introduce the tour to you, the different destinations with some information.

A tour around the monastery to get you to know this holy place and feel its atmosphere.

Not far away is the smallest town of Bulgaria, Melnik. The tour, tours Bulgaria, takes you to a place definitely not ‘small’ in history. The thousands-year-old Melnik offers serenity, a mountain, rich history, cosiness, stunning scenery, rich wine… It is a romantic and full of charm place.

Melnik is the smallest town of Bulgaria. People also know it as one of the places where great wine is produced and the place of the sand pyramids. The Kordopulov’s House is supposed to be the biggest residential building on the Balkan Peninsula from the Revival period. And it is in that small town of Melnik.

When you tell a Bulgarian Melnik, they will immediately tell you about the already mentioned things and also the Rozhen Monastery and Rupite.
Rupite is one of the best places to visit in Bulgaria, on tours Bulgaria. It is best known as the place where the Bulgarian medium Baba Vanga lived and was buried. The area is in fact the crater of an extinct volcano. There is the ‘St. Petka’ Church, built with Vanga’s will and a place of worship for many people. There is also her small house where she would meet all the people in need in the last 25 years of her life.

‘St. Antonius the Great’ Monastery and another monastery are awaiting us – this is the Rozhen Monastery, built in 1890, with fine frescoes and amazing wood carvings.

Like I promised, there are always legends and secrets around the monasteries and churches in Bulgaria. There is a mystery, they say, of Dobarsko Church. It is very distinct from average Orthodox churches. Its freѕсoeѕ dated 400 уears ago. Among them there are two dіѕmaуіng freѕсоeѕ of Јeѕuѕ Chrіѕt deрісted іn ѕomethіng that lookѕ lіke a ѕрaсeѕhір. It is a small church – 160 sq.m. but there are 460 human figures in it.

The village in the hug of three mountains

On the road to Gorno Draglishte. The village is located at the foot of Rila mountain, close to the small town of Razlog. Three mountains surround the place – Rila mountain, Pirin mountain and Rhodopi mountain. There is a small guest house there which has the ‘Green House’ certificate. That certificate is a brand for quality and hospitality; for authentic welcoming and care for the nature while hosts cater for their guests.

The house and its hosts offer various interesting traditional for the region activities. These are cooking local foods together with the attractive hostess, loom weaving. Also, using a distaff and a spindle, dancing traditional Bulgarian folklore dances…

We say goodbye to the attractive hosts and on the road to one of Bulgaria’s best ski resorts, Bansko. Bansko is a charming historic town with a stunning alpine background. Being part of the National Park Pirin, Bansko offers a great location for both summer vacations and ski holidays. There are multiple museums and landmarks in the town. 130 architectural and historical monuments of culture, seven of which are of national significance. Of the main sightseeings of the town of Bansko are the “St.Trinity” Church, the “Neofit Rilski” Museum Complex, the Museum House of Nikola Vaptsarov and the intellectual and historical centre “St. Paisiy Hilendarski”. In the Historical-Ethnographic Complex “Radonova House”, a rich ethnographic exposition presents in a unique way, the nature and the special features of the local material culture.

Nikopolis Ad Nestum. This is one of the three cities that the Roman Emperor Trajan built in year 106. He built it to celebrate the victory over the province of Dacia. It is in a very good condition. There is a wall around the huge city and inside you can see religious buildings, residential areas. And of course a huge Roman bath, with the area for the hot and cold water. Also the channels for the water and others.

Tours Bulgaria continue with the villages of Leshten and Kovachevitsa. They are two colourful villages located in the Rhodopi mountain. Leshten attracts tourists with its authentic look and the old houses, preserved since the Bulgarian Revival (18th – 19th century). The church “”St Paraskeva”” is from the year 1837. Now it is an Architectural and Cultural Monument of local importance.
Kovachevitsa was established after 1656 and it was an educational centre. Because of its typical architecture, in 1977 the village became a historical and architectural reservation. Interesting to see is the church “St. Nikolas”, which was built in 1847.

Rhodopi mountain is a magic place. There is special energy in this place. Warm, friendly people… Whichever place one visits there on tours Bulgaria, they will remember their experience. The following places are in the region of the mountain.

The villages of Dolno Dryanovo and Kribul and the town of Dospat. In Dolno Dryanovo the Stone heads sanctuary is of great interest. It is a prehistoric sanctuary together with a Thracian sanctuary. There are several stone figurines, for which people thought were a natural phenomenon. However, it appeared that they are human-made.

Follows the village of Kribul. It is famous, in tours Bulgaria, for the Skribina sanctuary. It’s a very interesting place. Lots of people visit the place to get healed. That much I will tell you and will let your imagination play with the information. Let us take you there to find out what Skribina is.

Dospat is not a very big town. Near it there is a beautiful dam. A stop there to relax, to enjoy the view and take some great photos.