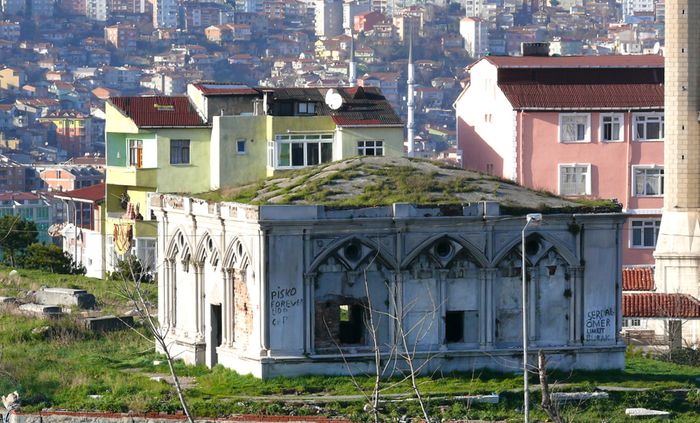 The sad story of a Galata banker

The Galata Banker had also drawn attentions with the loans he had given to the Ottoman Empire along with the architectural works he had added to Istanbul such as Kamondo stairs in Karakoy, Kamondo business center in Galata. Unfortunately, the story of wealthy Kamondo family ended in Auschwitz Concentration Camp…

The Jewish banker Avram Kamondo who had bestowed manyarchitectural works to Istanbul has quite a unique life story. The magnificentstairs across the former Otto-man Bank building in Galata and the KamondoBusiness Center are only two of the works of art he had left to Istanbul… Themausoleum of this Istanbul lover in Haskoy is now left to delinquency.

Works of art created in Istanbul…

Avram Kamondo`s mausoleum was first within the boundaries of the Haskoy Jewish Cemetery;however, it is now on the right of the road which was opened to connect Okmeydani to the Golden Horn Bridge. The building is on a small hill. Unfortunately, the mausoleum cannot be protected enough although it was included in the list of the cultural heritages by the Board of Protection of Cultural and Natural Objects. No one can prevent stealing and destroying of the marbles, irons and leads on the mausoleum which is now a shelter for drunkards. The building cannot display its old neogothic style glory.

Avram Kamondo had the unique Kamondo Stairs built in the street across the former Ottoman Bank building in Galata district to enable his son to visit him comfortably. and the other famous building of the famous banker was the Kamondo Business Center.

On the ground floor of the building that was built asfour-storey in neoclassic style as Number 36 on the Serdar-i Ekrem Street inGalata towards the end of the 19th Century there were stores and shops. Thewooden bay windows on the second and third floors added a distinctivecharacteristic to the building. Many authors, poets, sculptors and painterslived in Kamondo Building. Among them were Arif Dino, Ahmet Hamdi Tanpinar.Sait Faik, Yasar Kemal and Orhan Veil.

Son of a town-crier…

Avram Kamondo was born in Istanbul, Ortakoy in 1758 into aSpanish-Portuguese origin Jewish family. The family had migrated to Istanbul inthe 18th Century. His father was a town crier and at the same time he was amongthe administrators of the Ortakoy Synagogue.

The bank which was founded by Avram Kamondo and his brotherIzak became one of the leading banks of the time. The entire wealth was left toAvram Kamondo when his brother died of plague in 1832.

Supporter of the Ottoman Empire

Galata bankers were dealing with all kinds of financial andmonetary transactions as of the second half of the 19th Century and they hadgreat influence on the economy, finance and politics of the Ottoman Empire.Avram (Abraham) Kamondo was one of the most important ones among these Galatamoneymen.

Ottoman Empire`s entrance into the guidance of the West, collapseof the production and industry in Anatolia and connecting the economy to thetrade with Europe caused emerging of such powerful bankers like Avram Kamondo.The delicate vital spot for these bankers was selling the goods that werepurchased with loan from the West in return to cash and loan this great amountof money they have in hand with very high interests and make huge profits.