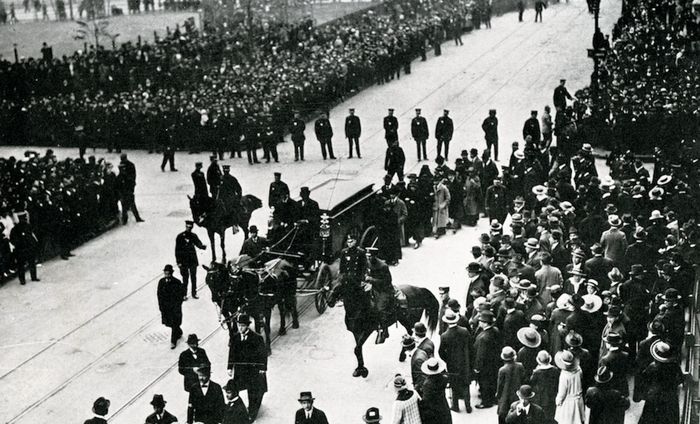 Mother is taken up with the preparations for the Passover meal, and Rikel the maid is helping her. It is only when the time comes for saying Kiddush that my father and the guest hold a Hebrew conversation. I am proud to find that I understand nearly every word of it. Here it is in full.

And the guest took the cup of wine from my father`s hand, and recited a Kiddush. But what a Kiddush! A Kiddush such as we had never heard before, and shall never hear again. First, the Hebrew—all a`s. Secondly, the voice, which seemed to come, not out of his beard, but out of the striped Turkish robe. I thought of my comrades, how they would have laughed, what slaps would have rained down, had they been present at that Kiddush.

Being alone, I was able to contain myself. I asked my father the Four Questions, and we all recited the Haggadah together. And I was elated to think that such a guest was ours, and no one else`s.

Our sage who wrote that one should not talk at meals (may he forgive me for saying so!) did not know Jewish life. When shall a Jew find time to talk, if not during a meal? Especially at Passover, when there is so much to say before the meal and after it. Rikel the maid handed the water, we washed our hands, repeated the Benediction, mother helped us to fish, and my father turned up his sleeves, and started a long Hebrew talk with the guest. He began with the first question one Jew asks another:

“What is your name?”

To which the guest replied all in a`s and all in one breath:

“Ayak Bakar Gashal Damas Hanoch Vassam Za`an Chafaf Tat- zatz.”
My father remained with his fork in the air, staring in amazement at the possessor of so long a name. I coughed and looked under the table, and my mother said, “Favele, you should be careful eating fish, or you might be choked with a bone,” while she gazed at our guest with awe. She appeared overcome by his name, although unable to understand it. My father, who understood, thought it necessary to explain it to her.
“You see, Ayak Bakar, that is our Alef-Bes inverted. It is apparently their custom to name people after the alphabet.”

“Alef-Bes! Alef-Bes!” repeated the guest with the sweet smile on his red cheeks, and his beautiful black eyes rested on us all, including Rikel the maid, in the most friendly fashion.